We are fortunate to have such fine craftsmen in our village, and one of those is ChrisTopp, who for 30 years has been forging iron into all shapes, sizes and products. Small or large, modern or historic, Chris and his team have tackled it all.

Have a look at Chris’s own website for details - perhaps you need a bit more iron in your life!
www.christopp.co.uk

His special gift to the Village is presented near the village green and here, in his own words, is Chris’s story:

Fareham in Hampshire were looking for something notable about their town upon which to base a project to celebrate the new millennium, and hit upon the name of Henry Cort (Pictured below), Ironmaster of Fareham, who at the end of the eighteenth century patented methods of mass producing wrought iron, which effectively enabled the Industrial Revolution to take place. 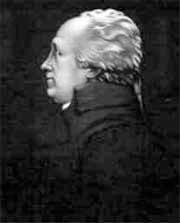 Chris Topp, Blacksmith of Carlton Husthwaite was approached as being the World’s only remaining ironmaster – concerning wrought iron that is. Chris Topp & Co were duly commissioned to conduct a Europe-wide competition to find twelve sculptures in wrought iron to decorate a newly refurbished West Street in Fareham.

Of seven hundred submitted designs from one hundred and seven artist blacksmiths, three entries stood out above the rest by virtue of the sheer quality of the drawings, and it turned out that the three smiths in question not only all came from Russia, but worked in the same college workshop in St Petersburg.

​Igor Andrukhin (Sculpture on the left), Vladimir Sokhonevich (Pictured and sample work) and Edward Fokin (sculpture picture on the right) were duly awarded three of the commissions which were worth – in Russian terms, perhaps the equivalent of a million pounds, but there was a problem. At that time, in 1999, the Russian economy was collapsing and money paid into Russian banks was unlikely to be paid out again. How were they to be paid? The solution was simple, they would come and make the work in Britain. As they were bringing the contract with them, they were not technically working for any British firm, so they didn’t need work permits. 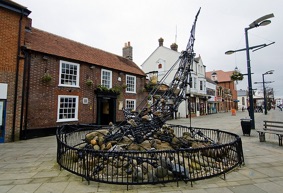 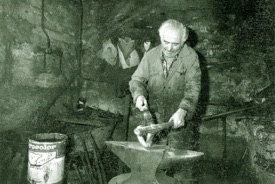 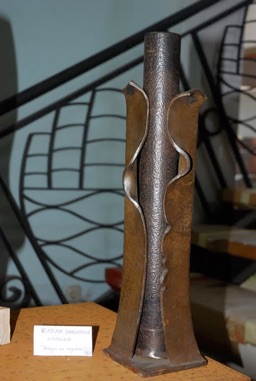 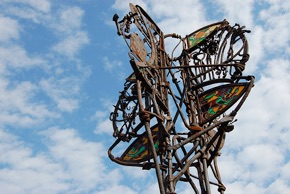 ​A workshop was fixed up in a barn at Tony Knowles’ farm, The Barugh, wrought iron materials were procured and the three commenced work on their respective projects under the watchful eye of Chris Topp.

The work progressed over a number of months and the three Russian smiths became well known in the area, especially in the pubs of Carlton and Thormanby. Bye and bye they brought their women folk over to visit and a party atmosphere prevailed.

Eventually their projects were completed and nearly ready to go to Fareham and a celebration was suggested prior to their leaving. Tony cleared out another barn which was furnished with a stage for musicians and a bar – provided by the pub. There were also a number of portable blacksmiths fires. A pig was procured and a spit borrowed from the flying club and the great day arrived. Around forty working blacksmiths from all over the country came to party and between the three workshops – the two barns and Chris Topp’s workshop in Back Lane, over the weekend Igor and Edward – Vladimir having left by this time – orchestrated the building of the village flower.

The flower was designed as a piece of modern sculpture but – in accordance with the rules of the Fareham competition – made using only the materials and techniques of Henry Cort. Thus the flower is nearly all of wrought iron, mostly recycled scrap as the blacksmith never wastes a piece of metal, and all the techniques are those of the traditional smith – all work being done from the fire by hammer and anvil. The weekend was a spectacular success and the flower was complete. All that remained was to find a piece of stone for a base and order a brass plaque to commemorate the occasion. Not quite all.

The Fareham project was all finished and the farm returning to normal but Igor and his family were still around as was Edward so we had the chance of another bash, this time in the village hall. A Russian Evening was organised with Russian food courtesy of Lena, Igor’s wife, and Russian dancing by Galya, Igor’s daughter. The hall was packed until after midnight, when Igor officially presented the Flower to the village.
​
The debate was then where to put it and opinions were divided between the Village Hall, where it was, and the Village Green. A meeting was convened to discuss the matter and again the Hall was full to overflowing. The motion was to put the Flower on the Village Green and was supported by such a majority that the opposition melted away and the Flower was duly installed in its present position by Maurice Duffield and his fork lift. 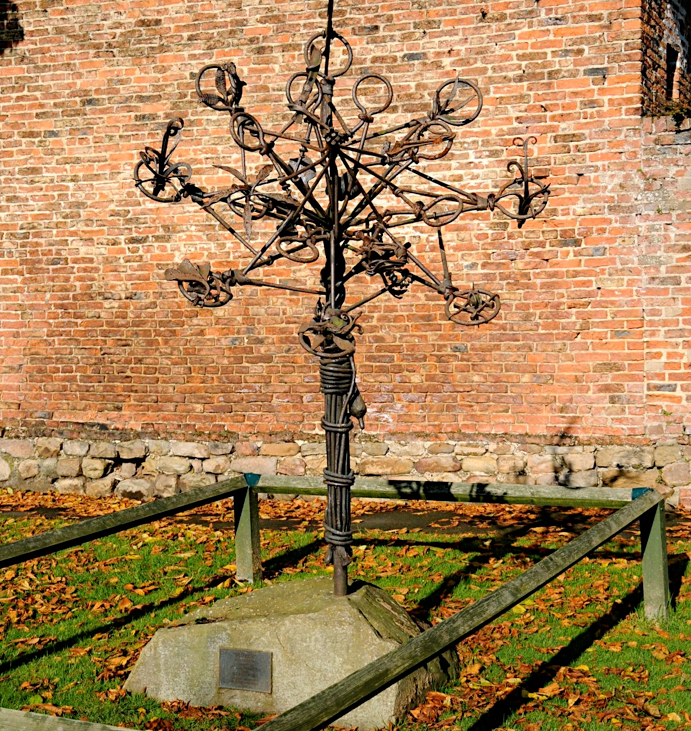 There has only been one suggestion to move the flower since its installation, proposing it was moved to the village hall, however there was overwhelming support by the villagers to ensure it remained in situ.

Sometimes at Christmas it gets “decorated” by local children, and whilst not to everyone’s taste it demonstrates the Village’s affection for our sculpture.